Can't get enough of my lil' cousin, JULIA!

Last night of my long weekend and I was able to spend it wisely through skype! yay! I got to talk with my cutie patootie and pretty cousin Julia who is in South Carolina. She really made my day, she's soooooo bibo and kulit! 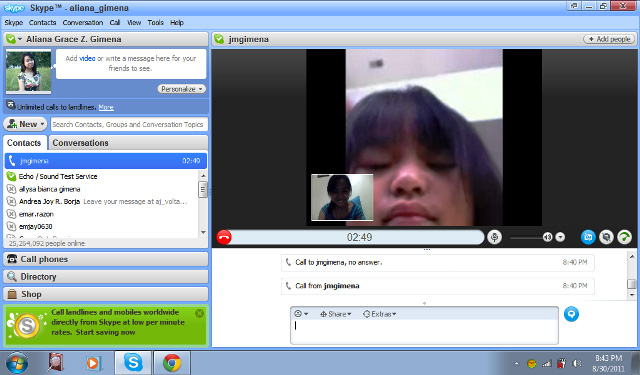 While skyping, Julia showed me her dance moves. She really loves to dance. This video made me miss her more.
*This is my first time to upload a video in my blog. Please bear with the video's quality and for speaking Kapampangan in the video. hehe*.


Because I really can't get enough of my cousin, here's another short video:


Can't wait to see Julia and her family on December! Fast forward to December pleasssssseeeee... :D
- August 30, 2011 No comments:

Disclaimer: It's not that I am GC (grade-conscious) but I am vying for Latin honors that's why I would want to have a good grade so that my family will be proud of me.
results in my AS 194* exam are out! I thought I'm gonna fail it, on the other hand I was still hoping to get a high grade. How ironic! Anyway, thank God I passed the exam but it wasn't the grade that I am expecting. I know I could have done better. :(

On the positive side, I am still thankful because I passed the exam. And there are still other requirements to pull up my grade. I gotta redeem myself in the next exam! Lezzzggo! I can do this!

Ever since, I've never been lucky in this aspect of my life. God knows how I keep on praying hard for it to come and happen. I always tell myself "one day". But I've been saying it for the nth time yet here I am, same old me. :( #sadtruth

I don't understand myself, sometimes I don't want to feel it but the feeling of wanting my prayer to be answered is stronger. I can't help but get jealous with other people when I see that they are very happy when it comes to what I am talking about.

For the nth time, it's been not reciprocated. I don't know why. :(

Waiting sucks you know, yes waiting sucks in ALL aspects! But even if I know it sucks, here I am still waiting and waiting.. ugggh! I hate this part of me. I've been asking for it as my birthday or Christmas gift but nothing happens. oh well... this is such a pathetic post!

I really HOPE and PRAY that one day I will say "FINALLY! It's worth the wait" and "I've waited so long to be this happy." When's that day???

Email ThisBlogThis!Share to TwitterShare to FacebookShare to Pinterest
Labels: thoughts

World Vision is a Christian relief, development and advocacy organization dedicated to working with children, families and communities to overcome poverty and injustice. To name a few World Vision ambassadors are Lea Salonga, Karen Davila, Tintin Bersola, Nikki Gil, Sam Concepcion and many more. :) One of World Vision's projects is the 12-hr Famine.

Last November 06, 2010, I was part of the launch of World Vision Philippines 12-hour Famine at Flying V Arena. It was the biggest movement here in our country fighting against hunger and poverty. No solid intake from 8am-8pm. But that sacrifice was truly worth it because we were able to raise funds and help millions of children in the Philippines.

This year, I am partaking again in the second launch of World Vision Philippines' 12-hour famine (It will be held on November 19, 2011 at Ynares Center). But before the event itself, today I attended the orientation and workshop for volunteers at their office. This was a day full of fun, insights and realizations. Thank you World Vision for inculcating such inspiring lessons. I am a PROUD HUNGER-FIGHTER! I am a PROUD WORLD VISION ADVOCATE! I commit myself in this endeavor and I will be a more responsible child sponsor. :) 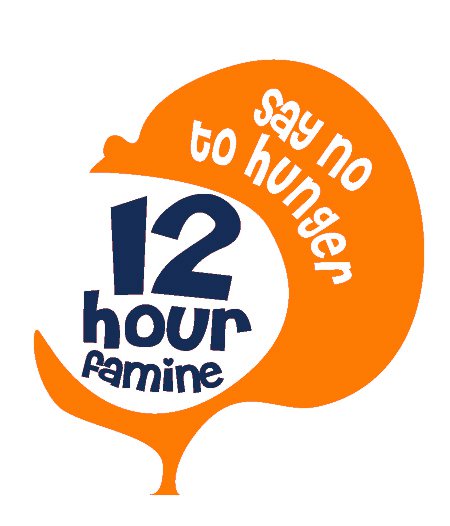 
If you want to help and know more about this famine movement, you may visit its official site:
http://www.12hourfamine.ph/beta/index.html

and if you want to have a clearer picture of what World Vision is, you may also visit their site:
http://worldvision.org.ph/


I've been an advocate of World Vision since August 2009. It was in the same date where I started to sponsor a child. By sponsoring this child, I am able to send her to school and help her community.

Lastly, I am spearheading a fund-raising so I can donate the money I raised before the 12-hr famine event. Any amount or any form of help will do. :) You can contact me through email: aliana_gimena@yahoo.com

Or by just simply helping me spread this post, will be highly appreciated. God Bless and Thank you! :)
- August 20, 2011 No comments:

I watched the game between UP and FEU. All throughout the game, I was so enthusiastic and energetic because UP was putting up a great fight by leading the game. Suddenly, everything changed during the last few minutes of the 4th quarter. FEU trailed UP, they led the game in the last few seconds. The game ended with a win by FEU. I was so upset after the game and I even cried because I've witnessed the efforts exerted by the UP Fighting Maroons just to win this one. When I saw the players' faces while singing the UP hymn, I felt more sad because we could have sang the hymn happily if we had that victory. The victory was almost in our hands but lost it. :(( Anyway, I just want to look at the positive and brighter side, maybe this happened because something better is waiting for the UP Maroons. Win or lose, I still LOVE my team. UP Fight! :)
- August 18, 2011 No comments:

JULY: A month dedicated for watching..

July was the month wherein I was able to watch different kinds of shows from mainstream to live shows. This was my first time to watch many shows in just a month and my eyes were very satisfied! :)) HAPPY WATCHING to me! hahaha.

Here's a breakdown of what I've watched last July:
1. Transformers 3: Dark of the Moon (July 02, 2011) - one of the most memorable movie in my entire life because I watched it with my family. It really mattered to me because I can't even remember the last time we watched a movie as a family. After watching, I had this "yehey-finally" moment.
I don't have many comments about this movie because I wasn't able to watch the previous installments of Transformers. I just have to give credit to Rosie Huntington-Whiteley because she's so hot! haha. But I think Megan Fox is still the best to portray the role. 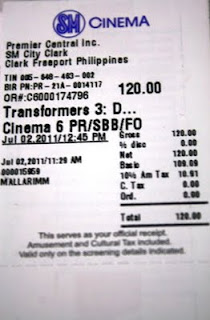 2. Monte Carlo (July 07, 2011) - I watched this with Yam Macalino at Trinoma. The story was mediocre but I liked it because Yam and I are Leighton Meester fans. hahaha. Plus, the movie was a little bit about traveling that's why I was so eager to watch it. When Paris was featured in the movie, I felt so jealous because traveling to Europe is one of my goals in life. :) 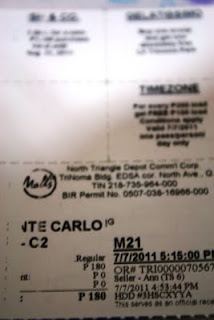 3. Rizal X (July 21, 2011) - Rizal X is a theater show conceptualized and directed by Dexter M. Santos (my professor in Theater 130: Stage Movement Class). Of course, we were required to watch this, but even if I wasn't mandated to watch it, I will still watch it because the concept was good. It was a musical play, the songs were all original, the choreography was simple yet hip and groovy. I would say Rizal X was way better than Glee. Two thumbs up to the whole production team of Rizal X and to Dulaang UP too. :) 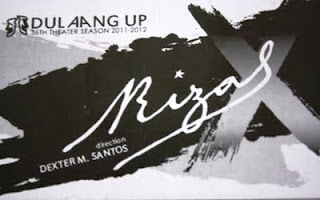 4. Babae Septic Tank (July 26, 2011) - No wonder why this movie won different awards and Eugene Domingo won as Best Actress. This indie film was really good. It was like a movie within a movie, it also served as a lens for the ordinary people to have a know-how about indie film-making. The comedy factor in the movie was a bonus. It was a laugh trip, I would say. Though there were points of weakness in the movie like for example, it tackled again about poverty and the slums. This theme has been used several times in other indie films.
So far, this was my best Cinemalaya experience. Why? Because I was able to see in person the whole cast of Babae sa Septic Tank. Luckily, Coco Martin was also present in the screening!! I was star-struck! :))) wooohooo!!! 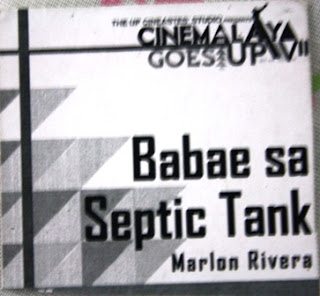 5. UAAP Season 74 Basketball Game (July 30, 2011) - yesssss! Another goal checked on my list! Finally, I got to watch a live basketball game. Since I was a college freshman, I've been aiming to watch a basketball game in Araneta and I was only able to watch now that I am a college senior. Oh well, it's okay. At least, I was able to show my support to my team (UP Fighting Maroons).
The first game was between UP and Ateneo. I already expected that Ateneo will win but I have to commend the Fighting Maroons for giving them a UP fight. They didn't give up. And can I just say? The Ateneo Blue Eagles are soooooo handsome and very "maangas" on court especially Kiefer Ravena and Nico Salva. :)) But, I am still loyal to the UP Fighting Maroons, there are also hot, good and handsome players from my school like Mike Gamboa, Gelo Montecastro, and Mike Silungan. But my most favorite is JETT MANUEL (Jersey number 6)! He's super CUTE! His smile energizes the whole court. I fell in love on how he plays inside the court. He's a good sport and he's not afraid to take chances. Trivia: He is an engineering student. What else can you ask for? Good basketball player na, gwapo and cute na, from UP at MATALINO pa! Complete package! :))) *And oh, I want a "Jett that Ball" shirt. hahaha* I'm his ultimate fan girl. :)))) 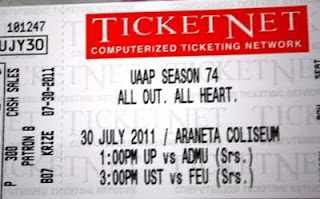 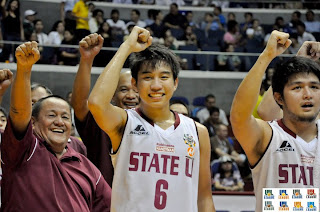