i'm not an avid fan of american idol but since the tickets were free c/o kuya ico, why not watch the concert? :)  we were seated at upper box A.

my most favorite song they sang was California King Bed by Pia and Stefano... check it out. (sorry for the bright lights and far view. hihi) *i was also singing my heart out so please bear with me. hahaha

every UAAP cheer dance competition, the hardest and most challenging experience is to have a ticket. it is because a lot of students from different universities badly want to witness the competition LIVE! and i am one of those desperate people. :))) 2 years ago, i camped out at araneta just to have a ticket. during that season, UP placed 3rd. now it is my last year in college (hopefully), that's why i was so desperate to get a ticket.

here's my story about this year's CDC...

first attempt: first day of release of tickets in araneta (september 14, 2011), i went there before 9am and as expected the line was very LOOOOOONG already! at first, the security assured us that everyone will be able to get a ticket. i was so happy and i had set my mind that i would skip my thesis class if ever i won't make it on time going back to UP. when i was already near the gate of the ticket booth, the security suddenly announced that there are no more tickets. i was really upset that time. :(

second attempt: i tried to go to the UP gym, and once again my hopes of having a ticket was crashed! the tickets were sold out already so i contacted my friends from other universities, but still i wasn't able to find one.

third attempt: never say never! the day of the CDC, i woke up early to try my luck again. i was at araneta with jasmin and pat around 6am. we were patiently waiting for the tickets to be released. suddenly, a blessing came! around 11am, my friend gelyn texted me that she has an extra upper box ticket. i was very HAPPY that time!!! thank God, pat and jasmin were also able to get their tickets.

here is the very precious ticket! 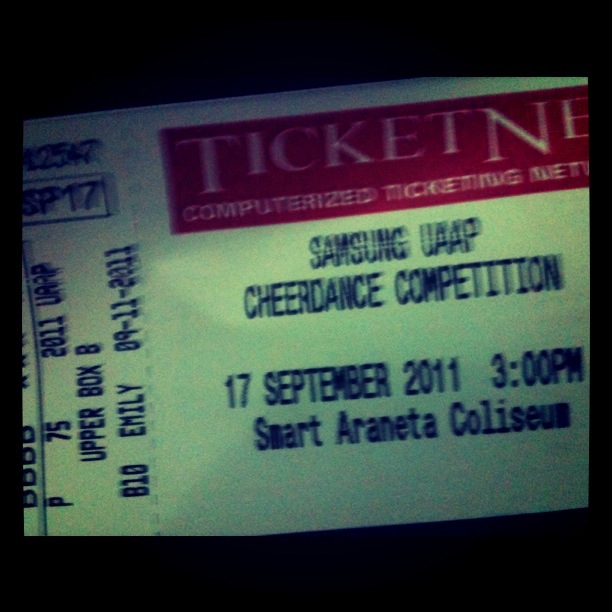 before CDC: pat, jasmin and I got so bored while waiting for the ticket release and so we thought of just doing this video. hahaha


we were able to get inside the big dome around 1pm and the competition proper started at 3pm. again, i'm so grateful that gelyn had an extra ticket. thank you sooooo much gelyn! and thanks also to ron and babsy for the company! i'm glad i was with these people.


showing my all out support to the UP Pep Squad!!! UP FIGHT! 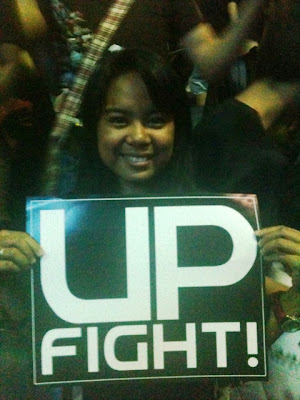 the ever supportive UP crowd! we dominated the big dome!!!! 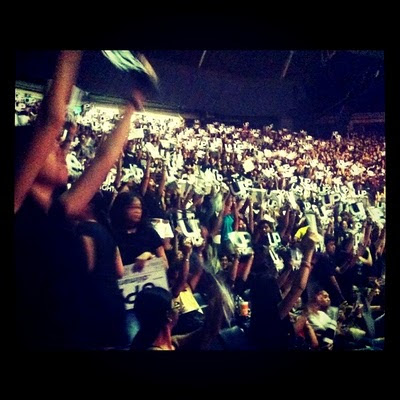 THE MOST AWAITED PART...


announcement of the winners!!!! UP swept all the awards! Group stunt competition, stunner award and the most coveted title - UAAP 2011 Cheer Dance Competition Champion!!!! fyi, UP Pep Squad also won last year's CDC, back to back champions! :)))

that moment when Boom Gonzales said "and STILL the defending champions...", everyone screamed out loud!!!!

SCHOOL SPIRIT! VICTORY! everything was worth it. good thing i never gave up in finding a ticket. i love UP Pep Squad!!! Congratulations! you made the whole UP community proud. :)

half-day in UP today (no classes in the afternoon) because it was the investiture of our UP President. anyway, my orgmates in UP Sandiwa and i spent our afternoon wisely (no to academic stuffs!) and so we decided to chill at our tambayan: chitchat-eat-tease-chitchat et al. i left my orgmates around 1pm so i could go to the UP gym with Jasmin hoping that we can get our cheerdance tickets but unfortunately, we weren't able to get one. :( moving on, we decided to go back to our tambayan and i told my orgmates/friends how my hopes and dreams in watching this year's cheerdance competition was crashed. i was really upset but thank God they were still there to lessen my BV mood.

then here comes our "spur-of-the-moment" moments... noel kept on saying that he wants to eat some apple turon, and i am craving too. i decided to buy some apple turon at CASAA, i bought 30pcs. i thought 30pcs would be enough but knowing these people (saying it behind my mind), 30pcs won't be enough. hahaha. :))
Note: it was their first time to eat apple turon, they just knew about it because of me! hahaha

seems like everybody wasn't satisfied, we decided to have food trip along LB(lutong-bahay) street. on our way to LB, i was surprised that noel told us some tidbits about his life or should i say lovelife? peace noel :)) we were the noisiest while walking in the academic oval but who cares? we're in UP, we have this "walang basagan ng trip" attitude. LOL.

at LB: fruit shake galore plus yummy fries, i forgot the stall's name! (but i just love the fries, they taste like NYFD fries. MUST TRY!)

here's the last and best part of our spur-of-the-moment drama: FRISBEE! we enjoyed playing frisbee at the track oval, behind UP Bahay ng Alumni. let me share some pictures and videos i took while we were at the track oval.

from left to right: noel, adana, charles, kat, mackie (too bad layton, faye and michelle left earlier, karla also came but she was not included in the pics and videos because she was late) 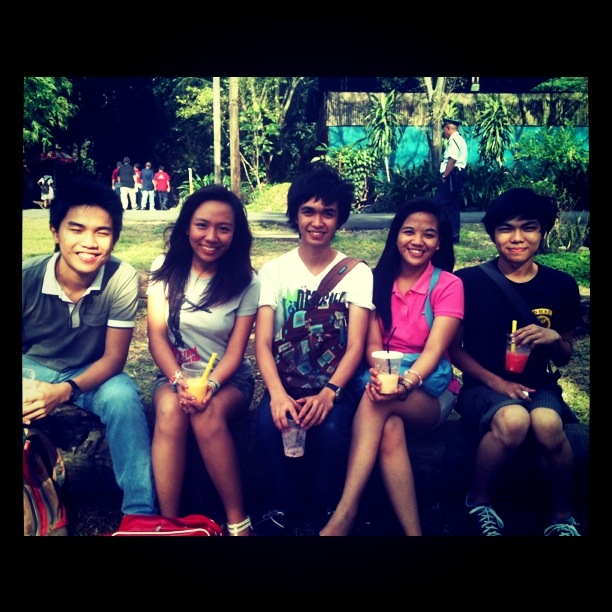 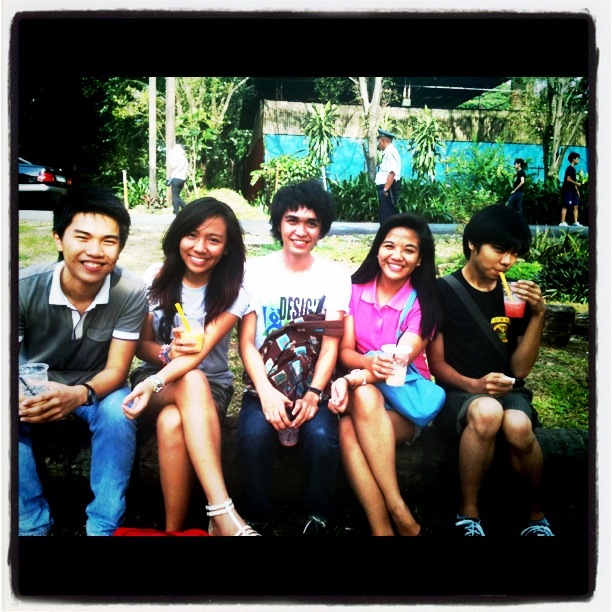 Email ThisBlogThis!Share to TwitterShare to FacebookShare to Pinterest
Labels: friends

This video was taken last May 29, 2011. My friends and I were so bored and so we thought of recording some songs. One of the songs we recorded was "Torete". We just did this for fun and out of boredom. :)))

Yamyam (playing the guitar), Miele (the girl at the back) and Bahm (the person to your right end)

P.S. It is Yamyam's birthday bash later, this is my present for you Yvette Anne -- get ready to be embarrassed (don't worry we're on the same boat). Haha love you yam, advance happy birthday!

I got up this morning thinking ahead what's in store for me in school. I feel stressed and frustrated about my academic work. Too many requirements to fulfill and too many to-do list to accomplish. *sigh*

But when I checked my phone and logged in to facebook, I saw a video posted by my uncle. He posted a video of Julia dancing in the tune of her favorite music from her favorite Nickelodeon show "Victorious". Julia loves to mimic the main protagonist (Tori Vega) in the said show.


Obviously, I can't get enough of my cousin's kakulitan and kabibohan! Here's another video of her. :)

Our own version of "Yeah 3x by Chris Brown"

I never thought projecting and acting in front of the camera would be that HARD! My confidence and self-esteem were challenged. But at the end of the day, it was all worth it. Being a part of a music video, is something that I am proud of. hahaha. I rarely do this kind of thing. It was a good EXPERIENCE. :)

This video was made as a tribute for the 18th anniversary of my org in UP Diliman, namely UP Sandiwa (the official organization of UP Diliman students from Tarlac).

Whenever I watch this video, a smile is always painted on my face. I don't know but I can't help but feel that we're too funny, maybe because this is a first time for all of us. I have to commend everyone who has been part of this music video. Good job guys! A friend once said "Naalis ang lungkot at stress ko pag pinapanood ko to." (Lagman, 2011). I have to agree with Angelo. :))